Smooth pulp and overflowing with juiciness--just one bite of floods the entire palate with sweet delight. So what’s the secret to these delicious Fukushima peaches?

“Most Japanese peaches are placed in little bags while they’re still on the tree,” explains Shin’ichi Katahira, who runs Michinoku Tourist Fruit Land in Fukushima City, “but growers in Fukushima rarely do this.” We take pride in picking our peaches when they are very close to being fully ripe, and letting them soak up as much sunshine as they want--which allows them to turn bright red.
Katahira’s passion for his craft is unmistakable in the way he talks. “Expert peach growers actually look very carefully at the color, shape, and size of each and every peach, picking only the ones that have reached their peak. I’m absolutely confident you’ll love them.”
“Peaches build up their sugar content over night, so the secret to getting peak flavor is picking them first thing in the early morning. You’ve got to taste the seasonal freshness of these sunrise-picked, direct-to-market peaches yourself to believe it.” 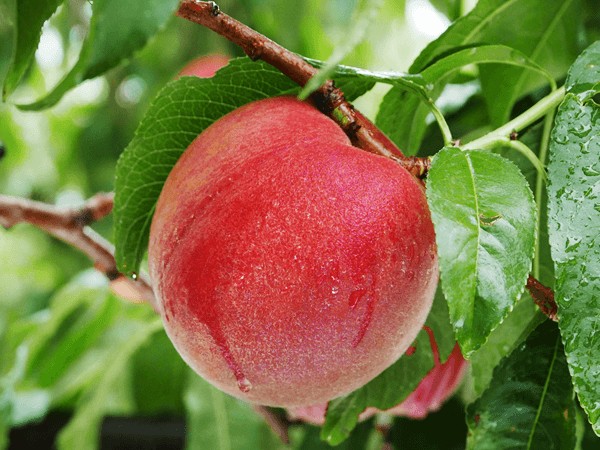 There’s another secret behind these delicious peaches, and that’s the exceptional summer heat of Fukushima’s mountain valleys, where much of the prefecture’s produce is grown.
There’s even a “peach relay” that goes on between early July and late September as the different brands of Fukushima peaches come into season. It kicks off with an original Fukushima peach brand called Hatsuhime in early July, followed by Akatsuki peaches, which are known for their silky pulp and exceptional flavor. In early September, it’s time to pick the extra-sweet, extra juicy Yuzora peaches. (It’s a long and varied season of peachy delights). It's a long relay of a variety of peachy delight.
Akatsuki is one of Fukushima’s signature peach varieties. Trial production began in peach-growing prefectures back in 1960, but most gave up trying to commercialize them due to the small fruits the trees produced. Fukushima was the only prefecture to carry on with their research, eventually developing techniques for enlarging the fruit. Today, more than half the Fukushima peach crop is Akatsuki peaches.
So dive into the “peach relay” yourself and enjoy delicious Akatsuki and other Fukushima peaches to your heart’s content.

Now’s your chance to try Fukushima’s incredible strawberries!
To buy them, visit our special sites on Amazon, Rakuten, or Yahoo! Shopping shown on the right.