A Fukushima Anpogaki persimmon grower takes pride in an uncompromising stance towards both beauty and taste.

Anpogaki persimmons have a beautifully brilliant orange color, just the right firmness of texture, and a luscious sweetness that defies description. That combination of outstanding characteristics makes them the perfect persimmon--so much so that they’re akin to edible works of art.
Anpogaki was originally a variety of dried persimmons, but they would be peeled and fumigated with sulfur prior to drying in order to prevent them from oxidizing and darkening--thus preserving their dazzling color. They’re already sweet right off the tree, with a brix rating of 17-18, but drying them concentrates the sugar and brings them all the way to 30 brix or more. This exceptional sweetness, which requires no added sugar or other added sweeteners, is a distinctive feature of Anpogaki persimmons. 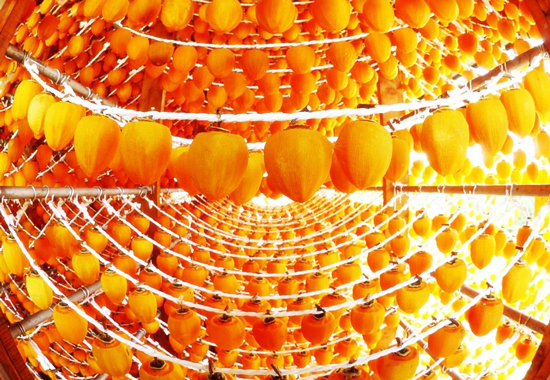 “This will mark the 95th year since people have been growing Anpogaki persimmons,” Satoshi Shishido told us. “It’s thanks to the outstanding growing techniques of our predecessors that we’ve been able to continue this long.” Shishido grows Anpogaki persimmons in the Isazawa area of Yanagawa-machi, part of a city called Date in the northern side of the Fukushima Valley.
The history of Anpogaki persimmons has been carefully recorded and passed down in the Isazawa area, making it the undisputed birthplace of the variety. The process of drying persimmons itself has been practiced since the Edo period, with local producers introducing the sulfur fumigation technique when making dried grapes. It was around 1920 that they established the technique for Anpogaki persimmons as well.
“Anpogaki persimmons undergo a slow drying process that takes about a month,” Shishido explains. “Drying them quickly causes the surface to dry out, and it also keeps them from developing that silky texture on the inside.”
While they’re drying, the moisture content is gradually removed through an alternating process that involves adding humidity (known as “returning”) and drying them out. Fukushima Anpogaki persimmons soak up the morning fog that it rolls in from the Abukuma River and then dry out in the crisp breezes that roll off the surrounding mountains.
”It takes about a year for an Anpogaki persimmon to go from a juicy fruit to a finished product,” Shishido tells us. “Once the fruit is hung inside the drying room, the temperature and humidity are repeatedly adjusted by opening and closing the windows according to the weather conditions--sometimes several times a day. We can’t take our eyes off them for a second.” The process is more like craftsmanship than farming.
Traditional growing regions for Anpogaki persimmons have twice faced calamities that threatened their surviving. The first was World War II, and the second was the Great East Japan Earthquake.
“The earthquake was that serious,” Shishido told us. “But we took comprehensive steps to ensure safety throughout the growing region, taking the same painstaking, time-consuming approach to recovery that we did to producing the persimmons themselves. This year, we’ve set a goal to get production back to 90% of what it was before the disaster.” He went on. “There was a time after the earthquake when we didn’t ship out any Anpogaki at all, but so many people kept asking us if we were going to get back up and running. They wanted us to hurry up and make them again. The disaster made us realize again just how eagerly people looked forward to our products.”
That’s exactly why Shishido refuses to compromise. “I’ll never budge on beauty or taste,” he declares.
Anpogaki have long been a treasured year-end and New Year’s gift in Japan, and in Fukushima, they’re one of the hallmarks of the winter season. Next time winter rolls around, make sure to get your fill of them through the end of their peak season in early March. 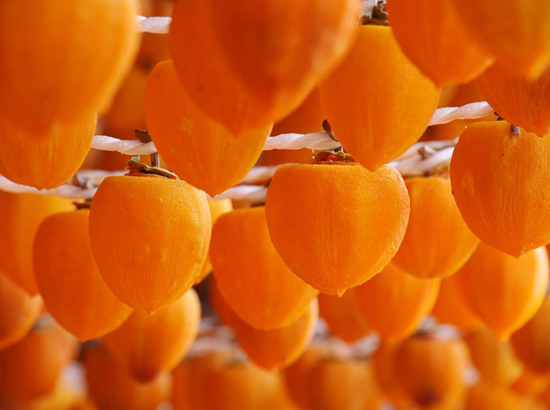 Now’s your chance to try Fukushima’s incredible Anpogaki!
To buy them, visit our special sites on Amazon, Rakuten, or Yahoo! Shopping shown on the right.