“My connection to Japanese pears run deeper than anyone’s”

This is Taiga Nemoto’s fourth year growing Japanese pears. If you get the sense that he just stepped out of a fashion magazine, it’s probably because he worked for a nationally-expanding fashion company for eight years before getting into agriculture. “I loved working in fashion, too,” Nemoto tells us with a smile, “but I like what I do now even more.” He comes from a farming family that has grown Japanese pears for generations--a full century, in fact--in Iwaki on the coast of Fukushima Prefecture. Nemoto made up his mind that he would someday carry on the family business, preserving its traditions. 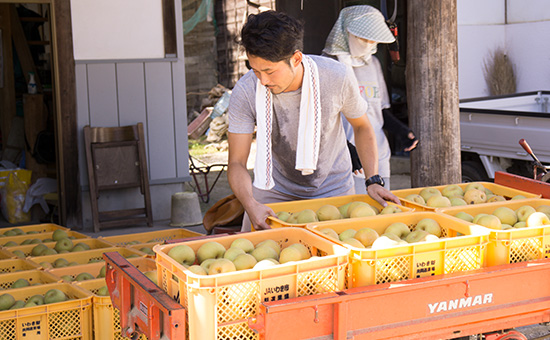 While his agricultural career may just be starting out, he tells us that his connection to Japanese pears runs deeper than anyone’s. Nemoto’s grandfather, who works alongside him, was once the head of the production technology division at the local agricultural co-op--and the undisputed expert in growing Japanese pears. Nemoto has spent every day at his grandfather’s side, absorbing his instruction. “Coastal people don’t pull their punches,” Nemoto tells us. “They say exactly what they’re thinking. He doesn’t cut me any slack just because I’m his grandson.” 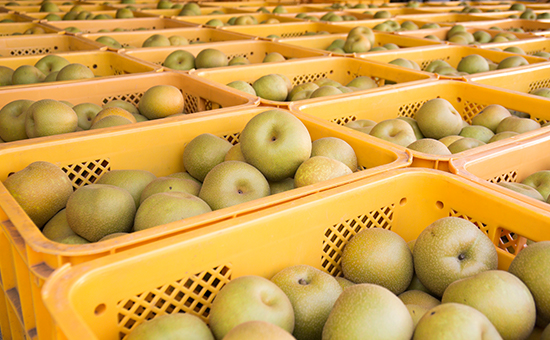 “Quality is everything when it comes to growing Japanese pears,” he explains. “We go after the absolute best. In fact, we insist on it.” The Iwaki region, where Nemoto’s orchard is located, is Fukushima Prefecture’s traditional production center for Japanese pears. Japanese pears are highly prized as gifts, and Nemoto says that he often hears about people trying Fukushima pears for the first time and saying that they’re the best Japanese pears they’ve ever tasted. “The fertility of the soil in this area is no joke,” Nemoto tells us, explaining one of the reasons why the pears around here are so delicious. “We make sure it’s packed full of nutrients.”
The crop this year has been fantastic, with an abundant yield of sweet fruit in his orchard. “People often say you’ve got to stress the fruit to make it sweet, but the summer heat is a major factor as well.”
Nemoto started exporting his Japanese pears to Vietnam last year as part of a JETRO project. He actually went to Ho Chi Minh City last year to offer point-of-sale samples, which were so popular that people started lining up to try them, and his Japanese pears flew off the shelves. The Fukushima prefectural initiative to export Japanese pears to Vietnam last year was actually the first of its kind in Japan.
“The project made me want to go global,” Nemoto said emphatically. “I want people in other countries to know how delicious Fukushima’s Japanese pears are and spread the pride of our producers even further. I think that’s what Fukushima Pride really means.” 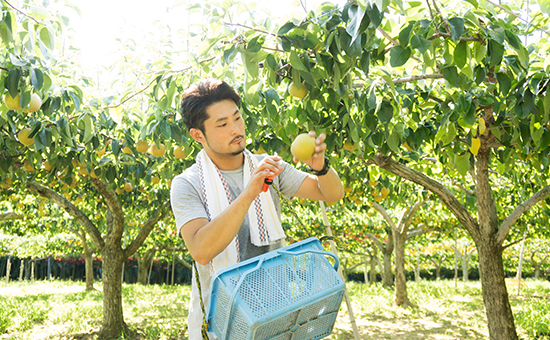 Now's your chance to try Fukushima's incredible Japanese pears!
To buy them, visit our special sites on Amazon, Rakuten, or Yahoo! Shopping shown on the right.