A special agricultural product from the Coastal Region, an area rich in history and traditions
Iwaki green onions―plump, long, and sweet! Producer：Kazunori Sakamoto

A conversation about green onions and staking his dreams on agriculture

The city of Iwaki is located in the Coastal Region of Fukushima Prefecture, and boasts a warm climate that has earned it the nickname “the Hawaii of Tohoku”. Winters bring little snow and the ground rarely freezes here, making it a perfect place to cultivate green onions. Iwaki is known as one of the best places to grow green onions in Fukushima, and historical records indicate that the practice was already in place by the late 1800s. Green onion cultivation can therefore be traced back well over a century here.
There are two types of green onions grown in Japan: those with an edible white portion known as naga-negi (literally “deep-root onions,” often referred to as “Welsh onions”) and those with edible green leaves known as ha-negi (literally “leaf onions,” often referred to as “leeks”). The green onions produced in Iwaki are mainly the former type.
Kazunori Sakamoto is head of Sakamoto Farms, which grows crops in Iwaki. “The best thing about Iwaki green onions,” he told us, “is how long and thick the white portions are.” This gives the onions a delightful crispness, which is coupled with a bold sweetness. Sakamoto once measured it at around 12–16º Brix. A sweet, delicious tangerine comes in at about 12º Brix, while a typical melon or persimmon measures around 16º Brix, meaning that Iwaki onions are on par with fruit in terms of their sweetness. “They also contain a spicy compound known as allicin, so actually they taste more spicy than sweet―but once you cook it, the allicin dissipates and leaves behind that amazing green onion sweetness,” he explained. His words are pure music to the ears of anyone who loves green onions. Sakamoto harvests and ships out his green onions by March at the earliest, May at the latest each year. 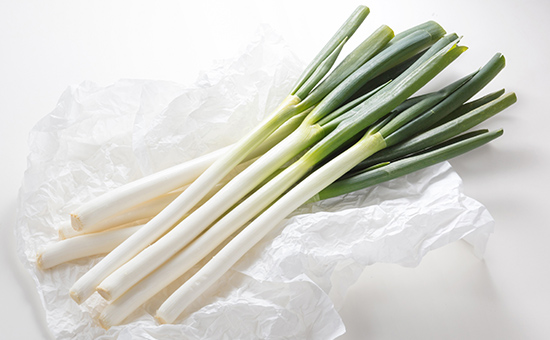 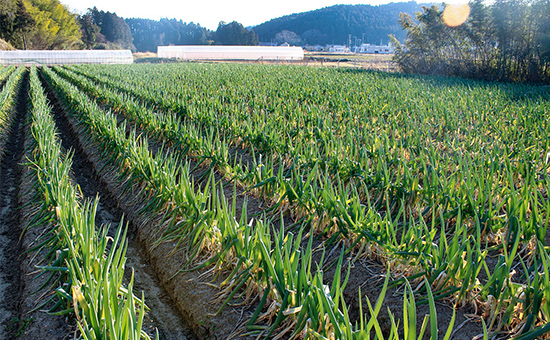 So why are Iwaki green onions so delicious? Sakamoto explained a local traditional practice called tsuchi-yose that may have something to do with it. “We repeatedly pile soil to cover up the roots as the green onions grow,” he told us. “That’s what allows the white portion to get so long and healthy. While it's a long-established way to grow green onions, producers in Iwaki have traditionally been doing it carefully, and so, the green onions are grown with an impressive look and a delicious taste.” Sakamoto also does rice farming, so he takes the rice husks they produce and combines them with used mushroom beds he gets from a friend of his who farms nameko mushrooms. He mixes the two together and lets them sit and ferment for a year as a compost for his onions. “That really brings out the sweet and savory flavors of the onions,” he says.
Sakamoto also cultivates rainbow carrots and other Western vegetables, making him rather well-known in the local community. People tend to think that he’s something of a maverick or a pioneer because of it, but there’s definitely more to him than that. Sakamoto grew up in a traditional farming household whose history stretches back to the mid-1800s or so. Each generation farmed what the times demanded―from paddy rice and vegetables to silkworms and more. “My father’s broad shoulders were amazing to me,” Sakamoto recalled with a touch of shyness. He went on to talk about the inspiration that drove him to get into farming about 25 years ago. “I want to expand the possibilities of agriculture,” he explained. “Respect the old traditions while bringing in new ideas.”
Sakamoto’s dream is to get into experience-based agriculture, working alongside his eldest son (who’s at university) and his eldest daughter (who’s in high school). Both of them are studying and pursuing a career in agriculture. “My son wants to bring the consumers out to the farm,” he explained. “Plenty of places let people help seed or harvest, but he wants to create a system that takes them beyond those one-dimensional experiences and really immerses them in the heart of the agricultural process. The entire family loves the idea and is backing him every step of the way. We want people to see the magic of farming, which may bring more people into agriculture and help promote our local community,” Sakamoto says. “And because green onions are the perfect way to show people what makes Iwaki so special,” he went on, “they’re also a perfect crop for experience-based agriculture.”

We ended by asking Sakamoto what “Fukushima Pride” means to him. He took his time before answering. “People who grow crops are second only to the gods,” he mused. “Without them, people wouldn’t have the food they need to survive. That’s why I take so much pride in being a farmer. What a joy to dedicate my life to such important work,” he concluded. 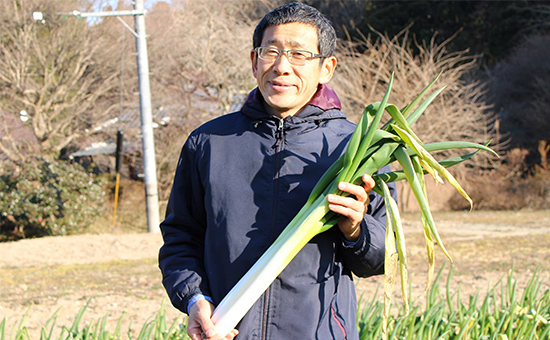 Now’s your chance to try Fukushima’s incredible Iwaki green onions!
To buy, visit our special sites on Amazon, Rakuten, or Yahoo! Shopping shown on the right.