Yasuhiko Hoshi is the representative for Aizukogen Tateiwa Nosan, an agricultural company located in the town of Minamiaizu, Fukushima Prefecture. The company is involved in rice production in a hilly and mountainous area, surrounded by natural beauty. “It’s never been easy to grow quality rice at high elevation,” he tells us. That’s because there needs to be above a certain temperature for rice to grow. Hoshi produces a brand called Satoyama-no-Tsubu, which is designed to grow at elevations of 300 meters or higher and one that Fukushima Prefecture has spent eleven years developing. Its features are large grains and firm consistency, and has earned a strong following among those who have tried it and declared it delicious.
“We get a lot of snow around here in the winter--about two meters of accumulation,” Hoshi explains. “All of that snowmelt seeps into the mountainside, collects minerals, and the clear spring water nourishes the rice.” Sure enough, the Tateiwa River flows right alongside his fields, and the water in the little streams flowing everywhere is so clear you can see straight through to the bottom. It’s as if the pure white grains of the Satoyama-no-Tsubu rice are reflecting the beauty and purity of the water. But that’s not the only reason Hoshi’s rice is so delicious. “The clean air is another major factor,” he adds. “There are places near the rice paddies where you can see a sea of clouds stretch out below. That’s how high up we are here. The sunshine is strong in the daytime, but the mornings and nights are really cold. The more the temperature changes suddenly, the more the rice tends to store up starch, giving it a sweeter flavor.” 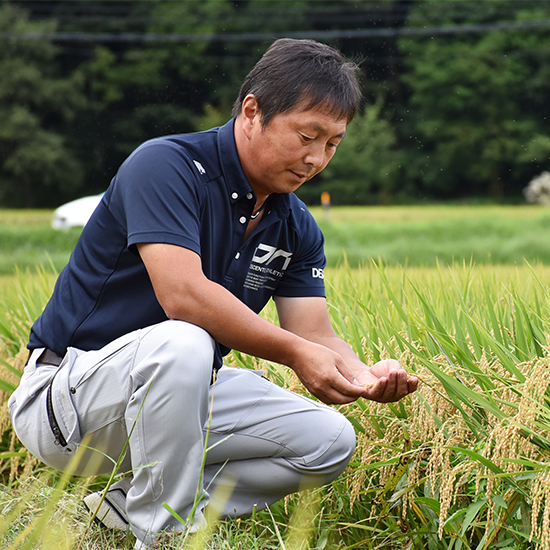 In 2018, Hoshi was given the great honor of presenting the Imperial Household with Satoyama-no-Tsubu rice for their annual Niiname-sai harvest ritual. He says he was delighted at the invitation at first, but then he learned about the preparations involved. As time went on, he began to feel the weight of what he had been asked to do. He had a Shinto priest purify his fields, and he carefully tended to his rice without a moment’s rest. He then sifted the harvested crop and selected the final offering by hand, grain by grain, before placing it in a hand-sewn cloth bag and packaging it in a paulownia box to be presented to the Imperial Household. A customer later said to him, “This is the same rice you presented to the emperor, isn’t it?” Hoshi said that upon hearing these words, all the tension in his shoulders instantly relaxed and he felt overjoyed.
One of the reasons Hoshi took on such an enormous task was because he thought it would be a great opportunity to promote his local region. The Tateiwa district where he grows Satoyama-no-Tsubu rice has always been a well-known buckwheat-producing area as well. Other specialty products include the sought-after Akakabu radishes and Nango tomatoes, the latter of which have earned nationwide recognition. Those who know their produce know Tateiwa as the home of exceptional brand-name crops. 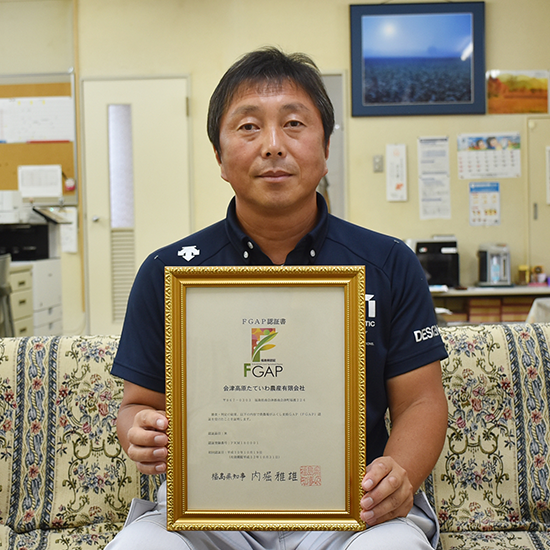 The same year Hoshi presented Satoyama-no-Tsubu rice to the Imperial Household, Aizukogen Tateiwa Nosan earned its Fukushima Good Agricultural Practices (FGAP) certification for rice production. This strict certification is awarded to producers who meet the strict production process criteria that include safe working environments, eco-friendly manufacturing processes, proper inventory management practices that eliminate wasted materials, and efforts to ensure food safety. “The program improves the reputation of our products while also promoting agriculture in the region,” Hoshi stressed.
We ended by asking Hoshi to talk about the concept of Fukushima Pride and what it meant to him personally. “The small farms scattered across this mountain valley are protected through the combined effort of all of these local producers,” he said. “More than anything else, our pride stems from being able to continue farming in this beautiful natural environment.” It was as if you could feel his love for the area pouring from every word. His gentle, hardworking manner is one that somehow feels familiar, as it is a character trait shared among all of the producers of Fukushima.

Click here to purchase your own delicious Fukushima Satoyama-no-Tsubu rice!

Don’t miss your chance to experience Fukushima Satoyama-no-Tsubu rice for yourself.
To buy, visit our special sites on Amazon, Rakuten, or Yahoo! Shopping shown on the right.