A fisherman whose company has been roundhaul fishing for generations in Fukushima Prefecture, the home and second-largest consumer of skipjack tuna in Japan Producer：Tai Nozaki

Teamwork is the key to skipjack tuna fishing, where freshness is everything

“Fukushima is as proud of its specialty skipjack tuna now as it was in the old days,” says Tai Nozaki, fourth-generation member and director of offshore fishery Suya Fishery. The company has a long history; there are even records of it having been a family-run shipping agency during the Edo period. Fukushima was known as a center of skipjack tuna fishing even back then.

Suya Fishery uses roundhaul nets to catch its fish. The method works by surrounding a school of fish with a net and then gradually closing in on it in order to capture them. It’s typically done using a team of three boats working together—the main boat that actually does the fishing, a transport boat to carry the haul to shore, and a search boat that looks for the schools. Once it leaves port, the main boat stays at sea for three to four weeks at a time. The nets are cast three or four times a day, with the transport ship making repeated trips to and from the shore. 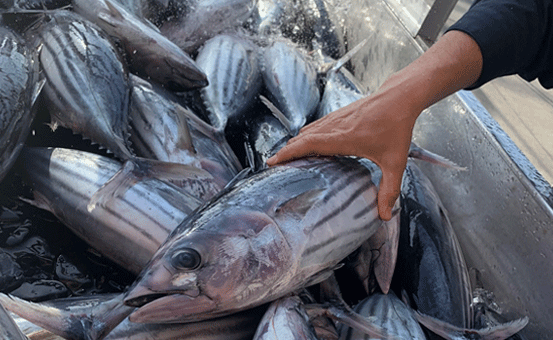 “The skipjack tuna here have been prized in the market as Fukushima's signature 'Joban catch',” Nozaki tells us. The seas off the coast of Fukushima mark the junction between two major sea currents, the Oyashio and the Kuroshio, creating excellent fishing grounds teeming with the fish that skipjack tuna feed on. But that’s not the only reason the skipjack tuna here are so highly praised. Because the area is so close to Japan’s largest consumer base the Tokyo Metro area. The morning catch in Fukushima can be delivered to the capital city’s market that day. “The fact that the fish are so fresh is what keeps the Fukushima skipjack tuna industry alive,” he says.

Once the fish are on the boat, they’re placed in a tank filled with ice-chilled seawater. Too little ice and the fish won’t stay fresh; too much and the cubes will rub against the fish and damage them. It takes an expert captain to determine the amount of ice to add moment by moment based on the size of the catch.
Meanwhile, Nozaki stands ready at the shore, drawing up operational plans for the fishing boats, checking the haul in other ports, and keeping a close eye on market prices so that he can tell the captains how much to catch. Suya Fishery has about 70 people on its fishing crew, with Nozaki and a handful of onshore support staff bringing the total employee count to around 75. Essentially, he is the director of the entire group. “Teamwork is what skipjack tuna fishing is all about. When there’s a big catch, everyone’s shouting out and sharing their joy with one another,” Nozaki says. “The employees become like family, so I’m always worried about them and concerned for their safety and health,” he stresses. “No matter how big or small a fishing business is, you can’t do anything without your crew.” 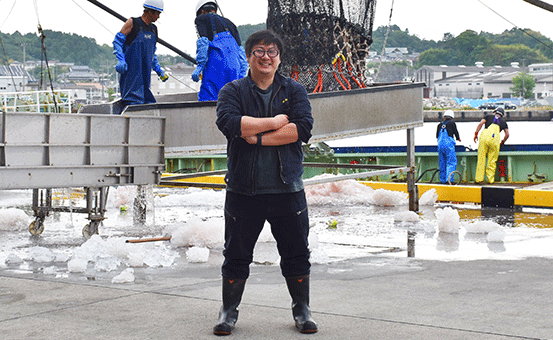 Four of the six fishing boats in Suya Fishery’s fleet were heavily damaged by the tsunami triggered by the Great East Japan Earthquake. This rendered some of them unusable, but those that could be repaired were repaired, two were rebuilt, and the company continues to steadily recover. Nothing could have happened without Nozaki and his team’s passionate commitment to the ongoing survival of Fukushima skipjack tuna fishing. Every catch is still tested for radioactivity, with strict controls in place to ensure safety.
“That’s a big reason market prices are returning to their pre-disaster levels,” Nozaki explained, “now that the rumors of contamination have largely fallen away.”

Roundhaul fishing boats like Suya Fishery’s are able to bring their haul into any Japanese port, and the one they choose is marked as the place of origin of the catch. However, Nozaki is always telling people that his greatest pride is being able to continue bringing in his catch to the ports of Fukushima. “Actually, Fukushima Prefecture is the second-largest consumer of skipjack tuna,” he points out. “The brokers wait for us at the ports. We want to get as much authentic Fukushima skipjack tuna as we can out into the local market and let people know how delicious and safe it is.” The Fukushima skipjack tuna season runs from around May to early September. Each year, when early signs of summer herald the coming of the fish, the fishing ports of Fukushima start overflowing with the bustling energy.

Now’s your chance to try Fukushima’s incredible skipjack tuna!
To buy, visit our special sites on Amazon, Rakuten, or Yahoo! Shopping is shown on the right.