A steadfast conviction and single-minded dedication to pork production

Have you heard of Utsukushima-egoma pork? It’s great to use it for deep-fried breaded pork cutlets or steak, but its unique characteristics really stand out when it’s thinly sliced and flash-cooked in boiling water as pork shabu-shabu. Utsukushima-egoma is an original brand of Fukushima pork that offers astoundingly refined flavor. The number of farmers who raise it are limited and bound by thorough brand controls, earning it a reputation among conoisseurs as being the best of the best.
Takanori Sato runs his pork farm in the hinterlands of Fukushima, in a city called Kitakata that is surrounded by natural beauty. “I take Sangenton pork, which is a combination of three superior breeds, and add in 3% crushed wild sesame (egoma) seeds into their feed a month before the animals are shipped out. It’s a labor-intensive process, but it allows me to produce and deliver a pork product that I can truly be proud of.” Sato has been in the pork business for thirty-five years, twelve of which he’s spent producing Utsukushima-egoma pork. 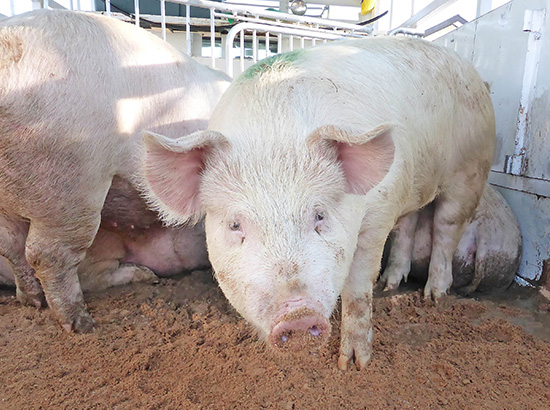 Wild sesame is an annual plant in the Labiatae family that really came into the spotlight during the recent health craze. It’s packed with alpha-linolenic acid, a precursor to the EPA and DHA found in blue-backed fish. When you add it to pig feed, it transfers into the meat as well. In short, Utsukushima-egoma pork could almost be said to have a similar fat structure as healthy blue-backed fish.
The wild sesame also makes Utsukushima-egoma meat milder in flavor, while making the marbling tender and sweet. And with the added nutritional benefits of blue-backed fish, it’s the perfect pork for modern, health-conscious living.
Fukushima Prefecture was Japan’s number-one producer of wild sesame prior to the Great East Japan Earthquake, so the Utsukushima-egoma pork brand is one that was developed out of local specialty products.
”It’s not an exaggeration to say that my life has been changed by this pork,” Sato says. He’s obsessed with getting people to realize how delicious it is--to the point that he even opened up a farm-to-table restaurant called Shiokawa-ya in Kitakata with menu items using the pork he produces. It’s been around for five years now, if you count the time it was a set-meal restaurant prior to its current incarnation. It currently serves char-siu rice bowls, fried tenderloin cutlet rice bowls, fried ground pork cutlets, and fried pork skewers, with pork shabu-shabu added to the dinner menu as well.
“Put simply,” he says, “this is a revolutionary brand that changes the concept of pork entirely. The marbling is light and never cloying. A lot of people who aren’t normally pork fans will eat pork if it’s Utsukushima-egoma pork. Women and older people seem to be particularly fond of it, and we have many repeat customers in those groups. There’s just something special about it.” Two years ago he added ramen topped with their popular char siu to the menu, and it became a huge hit--a favorite dish in Kitakata, where the ramen competition is fierce. 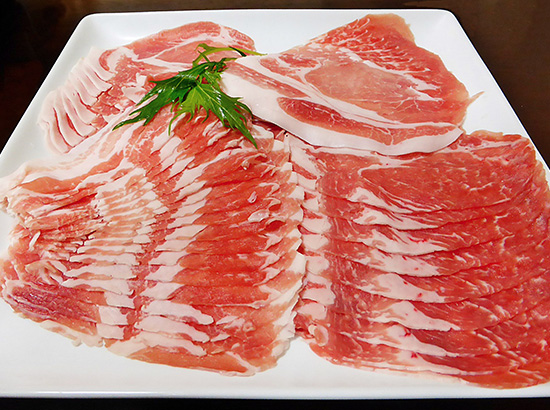 “I never thought I’d own a restaurant,” Sato admits. “I really just wanted to get more people to experience how delicious Utsukushima-egoma pork is. If I went into it trying to get rich, I was pretty sure it wouldn’t succeed.”
Sato runs a three-generation pork farm with his father and his son who’s in his late 20s. When he was younger, an experienced meat distributor told him that the character of the producer comes through in the meat. Sato ended up living by those words.
”I make sure the animals aren’t stressed,” he explains. “I give them quality feed. I’m always making sure they’re in good health. The more attention and care you give them, the better the meat is. Utsukushima-egoma pork in particular is rewarding in that it is such a labor-intensive brand to produce. Ultimately, though I just want the people who enjoy it to be happy. That’s why I do what I do.”
The powerful words uttered by this soft-spoken man are testament to his unshakable commitment as a Fukushima producer.

Now’s your chance to try Fukushima’s incredible egoma pork!
To buy them, visit our special sites on Amazon, Rakuten, or Yahoo! Shopping shown on the right.