Why are Fukushima apples so delicious? Because they’re fully ripened on the tree! Producer：Yukihiro Abe

The pride of a longstanding pioneer bears fruit as “Fukushima Pride”

Fukushima Prefecture is known as a fruit paradise, boasting the fifth-highest yield in the country (in fiscal 2017) of apples--its signature fruit. And it was Yukihiro Abe’s grandfather, president of Yamato Kaju Orchards, who was the first in Fukushima to successfully cultivate apples during the Meiji era. He used his own funds to introduce production techniques and set up his own study group, increasing the number of producers and inspiring the friendly competition that made a major contribution to developing the local industry.
An apple grower himself, Abe carries on the pride of his pioneering grandfather. He’s held three convictions ever since he was in his twenties: push ahead in any kind of adversity, always take action, and observe your results. His goal? To be the best apple-grower in Japan. Before long he was raking in the awards--from the mayor and the governor at prefectural contests, and even one from the Minister of Agriculture, Forestry and Fisheries. His apples even took the gold award at a nationwide apple contest to commemorate the 60th anniversary of the Fuji apple in the year 2000. 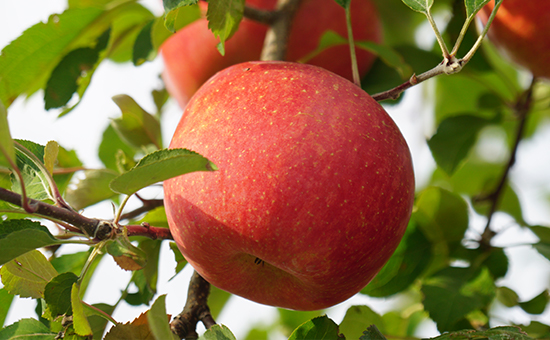 Nothing, it seemed, could shake Abe’s convictions. Then the Great East Japan Earthquake struck. Driven by a desire to repay people for the tremendous recovery support that flooded in from all over Japan, he reformulated his three convictions, striving to bring the people who enjoyed his apples good health, a warm heart, and a smile.
“Prior to the earthquake,” Abe explains, “I was all about making a superior product--like an uncompromising craftsman or artist. But things are different now. Each day I think about what my orchard wants. I listen to my apples. In that way, I’m trying to be more like a doctor. It’s an approach that results in apples that bring people joy--and I’ve realized that that’s the most important thing.” 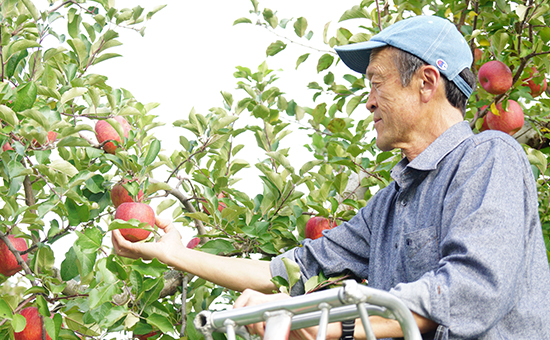 We asked Abe why he thought Fukushima apples were so delicious. “It’s because Fukushima is located in a warmer region than most apple production districts,” he replied. “The trees flower here before anywhere else, and the fruit can be harvested as late as the latter half of December. That’s how long Fukushima apples are exposed to our abundant sunshine. It also means that we can allow them to ripen completely on the trees before picking them. That’s the secret behind their amazing taste.”
Abe also serves as chairman of the Fukushima Apple Study Group, a small, highly-select group limited to 25 people and made up of leading producers, or those aspiring to be leading producers, in the apple-growing regions of Fukushima City (there are currently 22 members). They’re involved in everything from varietal development and improving production technologies to developing AFFrinnovation products--all in an attempt to keep up with ever-changing consumer needs. The group has longstanding traditions (2020 will mark its 50th year), and plays a critical role in driving apple production in Fukushima City. Curiously enough, Abe has found himself in the same position as his grandfather, heading up the Study Group. “I keep saying that as producers, there are two things we cannot do without: burning passion for what we do, and the practical ability to take action no matter what.” There is perhaps no better definition of Fukushima Pride than that. 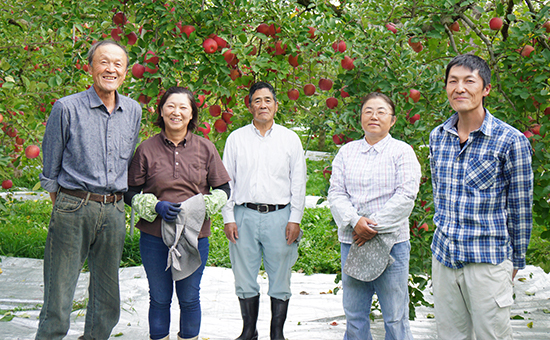 Now's your chance to try Fukushima's incredible apples!
To buy them, visit our special sites on Amazon, Rakuten, or Yahoo! Shopping shown on the right.