Dreams and challenges born from self-questioning:
What do I want to do with agriculture?

Meet Yuki Sato, president of Date Suimitsu Orchards, a farm that produces and sells fruit. “I had dreams of working in film since I was a student,” he told us. “Before the earthquake, I was working for an anime production company in Tokyo.” But he ended up returning to his family farm after the disaster. The Great East Japan Earthquake welled up a love for his hometown. “I wanted to do something for Fukushima,” he said.
Sato participated in a revitalization project after getting into agriculture, where he met a diverse group of producers engaged in cutting-edge initiatives. One was selling hands-on-experiences alongside his produce, one was trying to get the Guinness World Record for the highest peach brix rating, one wanted to make a produce theme park--the list goes on. It caused him to repeatedly ask himself what he wanted to do with agriculture. His answer? Use film and photography to showcase the beauty of farming and produce. And with that, his former dream of working in film became part of his work as a farmer. 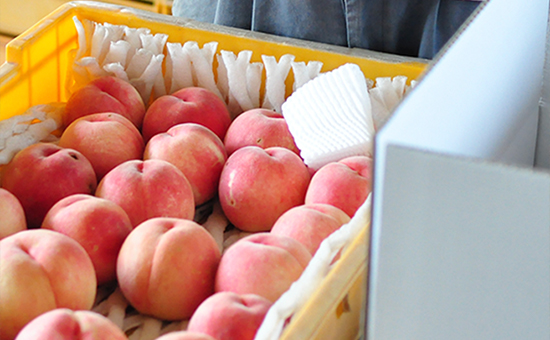 A visit to the Date Suimitsu Orchards website brings up a video of young people sharing wine and peaches at dusk, surrounded by fruit trees. It’s an agricultural promotional video produced by Sato entitled A Fruit-rich Life. His website is also full of photographs beautiful enough to be enjoyed as artwork.
After the earthquake, Sato got involved in online sales of his produce. He developed chic packaging concept called Share Fruits, which featured perforated boxes that allowed people to break off individual peaches and share them with others. It won the 2017 Good Design award and became a huge hit. 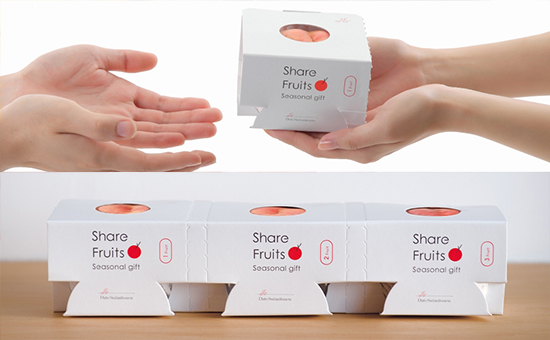 “If we can break free of people’s existing notions about farming,” Sato says, “we can do whatever we want.” That’s where Sato’s unbridled creativity and fresh-faced talent shine through. “Still, you’ve got to remain firmly rooted in the business of farming,” he continues. “My philosophy with Date Suimitsu Orchards is clearly stated: Keep on farming. I’m a farmer, so if I’m not passionate about and committed to growing fruit and don’t take pride in my work, nothing else is going to work—no matter what I do.”

The fruit that Sato produces--cherries, peaches, apples, grapes, and Anpogaki persimmons--has him working nonstop from June through December. He’s particularly invested in his peaches, which have a high yield.
“Not surprisingly, I’m personally partial to the Akatsuki peaches, which are a signature varietal of Fukushima Prefecture. They have that intense peachy aroma that everyone immediately associates with peaches,” he says with a smile. “We had just the right amount of rainfall this past May, and the peaches are doing better than usual as a result. I’m expecting them to taste great, too. The flavor of Fukushima peaches is a true hallmark of summer. You’ve got to try them.” 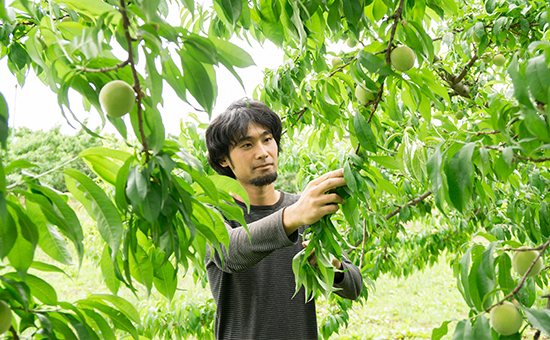 Now's your chance to try Fukushima's incredible peaches!
To buy them, visit our special sites on Amazon, Rakuten, or Yahoo! Shopping shown on the right.