A fisherman who works the convergence of offshore currents, and flounder backed by the dedication of family Producer：Yukio Sato

The signature “Joban catch” and granddaddy of them all

The Soma area in the Coastal Region of Fukushima Prefecture is an offshore bottom-trawler’s hub. It’s a name that’s known across Japan, with twenty-some fishing boats jostling for position amidst the teeming schools of fish. Seafood caught off the coast of Fukushima in particular is called the “Joban catch” and has had a fantastic reputation in the markets since before the earthquake. And the signature Joban catch--the granddaddy of them all--is the flounder.
There is a convergence of currents in seas off the coast of Fukushima Prefecture, with the Oyashio flowing in from the north and the Kuroshio coming up from the south. This results in fertile fishing grounds teeming with feed. In addition to these distinctive characteristics--unusual even for Japan--the fishing industry here also has regulations in place that prohibit taking flounder smaller than 30 centimeters in length. 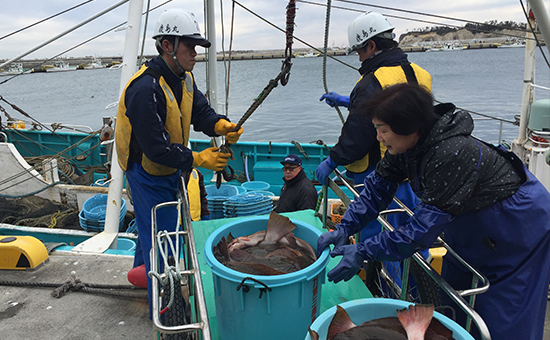 Juvenile fish are thus consistently returned to the sea, for ongoing resource management.
Yukio Sato, captain of a Soma fishing vessel called the Daisan Kashima Maru, told us more. “The flounder we catch in Fukushima are constantly feeding and being tossed around by the currents, which makes their meat incredibly springy and exceptionally delicious. Most people in Japan think of flounder as a sashimi fish, but in my house we eat it all kinds of ways--fried, as tempura, crumbled soboro. It’s outstanding rolled in shiso leaves with some pickled plum paste and fried in tempura batter.”
Soma is also well-known as the city that first started bringing live fish from the sea to market. Supporting the finishing industry here are the so-called “coastal mamas”, local women who are primarily fishermen's wives. They wait for the boats to come into port, sort the catch, and take charge of selling it. “The industry could not survive without them,” Sato says. “Both my wife and my daughter are hardworking ‘coastal mamas’. The women who safeguard the Soma coast are positive and energetic anyway.” 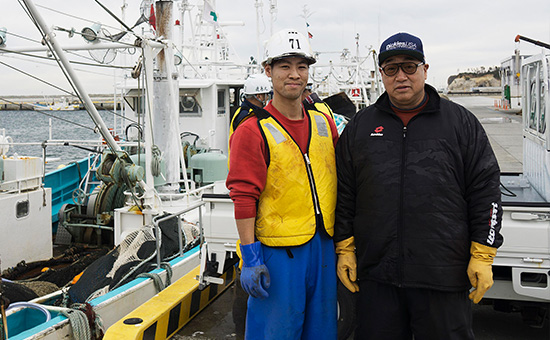 “After the earthquake,” he told us, “my son-in-law joined my crew. We don’t have any sons, so I figured that my family’s line of fishermen would end with me.” His face broke into a smile. “I was overjoyed to have a successor.” His daughter’s husband, Yuji Sato, had no fishing experience when he started, but he’s already learning how to pilot the boat. “I’m relying on him even more now that we have a grandkid,” Sato says. “Eventually I’ll turn the boat over to him.”
Both of Yukio Sato’s parents, now passed, were fishermen. Sato took over as captain when he was 25 years old. “Just before my mother died, she took my hands in hers and told me I was her treasure,” Sato shared. “I now know what she meant. My wife, my daughter, my son-in-law, and my grandkid are truly my treasures.”
This is how families come together to run the fishing industry along the Soma coast--and every flounder that comes into port is backed by fishermen like Sato and the dedication of their families.
After the quake, fishing continues in Fukushima on a trial basis, but now that the safety of the local seafood has been confirmed and restrictions lifted on shipping it out, full-scale operations are gradually resuming.
We closed by asking Sato his thoughts on Fukushima Pride. His reply was powerful and to the point. “It’s about bringing fish as good as any caught in other parts of Japan to market.” 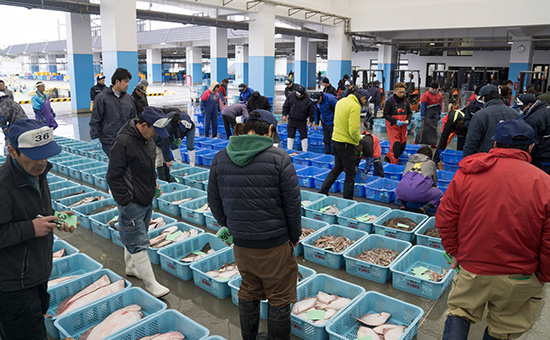 Now's your chance to try Fukushima's incredible flounder!
To buy them, visit our special sites on Amazon, Rakuten, or Yahoo! Shopping shown on the right.